Cerebral dramas with a strong female lead
Controversial political dramas
Visually striking dark British movies
Critically acclaimed cerebral romantic movies
Netflix quite specifically believes I enjoy these genres of movies. Netflix is often wrong, and while I appreciate the effort, Netflix does not realize that often movies are just a vehicle for popcorn consumption.
Popcorn is perhaps the best snack ever. I don’t have a microwave (gasp!) or an air popper (sigh!) so I pop it the old fashioned way, in a pot on the stove.  This method only takes 5 minutes and saves me from the dreaded ‘popcorn lung’.  In my work, I inhale enough flour to contract the fictitious ‘pasta lung’ – one less ‘lung’ to catch the better.  The buttery flavour in microwave popcorn – that’s the culprit  – a chemical diacetyl was used as a flavour enhancer. Luckily, after many lawsuits almost all major brands of microwave popcorn do not contain diacetyl anymore, so we can all breathe a little easier.  In spite of this, I’ll stick to making my own popcorn and knowing all the ingredients, thank-you-very-much.
And popcorn I make – truffle salt popcorn, caramel corn with nuts, olive oil and pepper popcorn and the Pièce de résistance – caramel bacon popcorn. Salty, sweet, gooey and crunchy, delicious. 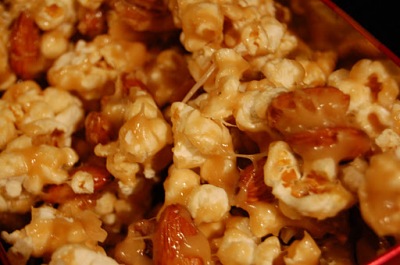 Caramel Coated Popcorn with Pecans, Almonds and Bacon!
adapted from Wanda’s Pie in the Sky by Wanda Beaver
yield 12-14 cups
10 cups popped organic corn
¾ cup toasted pecans
¾ cup toaster almonds
¾ cup bacon or pancetta, cubed and cooked
1 1/3 cups granulated sugar
½ cup corn syrup
1 cup butter
2 tsp vanilla
kosher salt for sprinkling
1
1)  Butter 2 large baking sheets.
2)  Combine popcorn, bacon and nuts in a large bowl.
3)  At medium heat, bring sugar, corn syrup and butter to a boil in a large saucepan. Stir
occasionally for 10-15 minutes until dark golden.
4)  Add vanilla carefully, it will sputter.
5)  Spray a spatula with non-stick cooking spray. Remove mixture from heat and pour into
large bowl over the popcorn. Using the spatula, work quickly to coat the popcorn with the
molten hot sugar.
6)  Spread mixture onto baking trays. Sprinkle with kosher salt. The sugar will harden
quickly. Allow cool and break into pieces.
7)  Store in sealed container for up to 2 weeks – but it won’t last that long, I promise!
****feel free to leave out the bacon – keep the recipe the same or add 3/4 cup of something else,  toasted coconut, dried cranberries – go wild!