Bologna, La Grassa, the fat city, known for its deliciously decadent food and Europe’s oldest university. Bologna is a wonderful city, bustling and beautiful, with young people everywhere and a great nightlife. I met six of my friends there for some togetherness. I truly bask in the togetherness when I can get it because here in Bilegno, population 70, I am alone. I cherish each email, letter, facebook and blog comment. I truly do. Keep them coming.

We started our touristing at the Piazza Maggiore, home of my current favourite piece of Italian art, the stone and bronze statue, Neptune and Attendants. He is huge and beautiful with his buxom attendants spewing water from every orifice. What a fountain! How risque.

For lunch, we went to my friends restaurant, La Capriata, for a traditional Bolognese meal. Delicious and so nice to be on the receiving end of great food for a change.

After eating a big meal, it only makes sense to climb to the top of a ridiculously large tower. Right? So, we did. Bologna has two towers remaining from an earthquake that took the rest of the magnificent towers down. The tower we climbed, Torre degli Asinelli, is 97.2 metres and 500 stairs, once at the top, we had an incredible view of Bologna. References to the Lord of the Rings were made by me, groans were made by others. 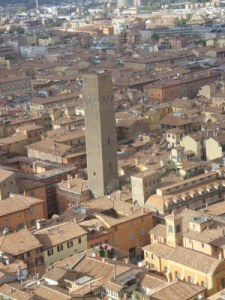 After getting dizzy from the tower, we had the BEST gelato of my life. I fought through the nausea and loved every bite of my marscapone, ricotta and cocoa gelato.

Nightlife in Bologna. We found an Irish pub that made us feel right at home, drinking Guinness and Harp, we made new American and Australian friends and drank the night away. 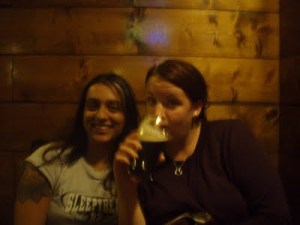 Oh, togetherness. Let me bask in your glory a few more times before I am done!